When this Lithonia, GA based third generation family-owned business decided to upgrade their antiquated punch line, they had a few challenges ahead of them. First, they had to find a machine that could fit into their existing facility and then they had to convince the older generations that the PythonX was the right piece of equipment. After extensive research, they took a leap and their throughput increased by at least 40%.

The logo of Universal Steel Inc. represents their proud history. Universal Steel is a third generation family-owned business founded in 1966 by Bill Bourne. Founder Bill Bourne had a shiny gold hard hat he wore to jobsites. He was six feet six inches tall and his height along with his shiny gold hard hat made him very noticeable. The third-generation wears a more modern hard hat but they wanted to incorporate the gold hard hat, so they used it along with a steel beam to create their new company logo. The new logo depicts a meaningful symbol for Universal Steel that will represent the company well into the future

They began as Slate Steel, an ornamental iron business, fabricating handrails that were popular on residential houses at that time. In 1970, Slate Steel merged with another company called Universal Steel and they retained the name. Over the years, the core business began to change. They started off as a supplier and installer of ornamental iron and are now one of the premier fabricators of structural and miscellaneous steel in the southeast.

Although the business was changing, the equipment had not. Their manufacturing process was still very manual and their punch line was seriously outdated. When the 3rd generation took over the reins, Bray Bourne who is now CEO of Universal Steel Inc. knew that they had to catch up quickly with technology in order to remain competitive. As he explains, “We took a big step with our automation. Our last punch line was purchased by my grandfather and we were a few generations behind when we decided to upgrade our equipment.” The decision to automate came down to which new machine was going to make them better at what they do best. Bourne also explains, “I read that a new piece of equipment should not create something new for your business but should allow you to do what you do best, better than before. Where we gained our competitive advantage is that we are already fabricating structural steel as well as stairs and handrails and the now with the PythonX, we are more efficient”.

Bourne knew that the PythonX was the right choice of equipment for Universal Steel but he had to prove it by measuring its ability against competitive machines. He used a simple beam to guide his search and the PythonX kept proving to be the best choice. As he explains, “I had a drawing of a simple 16 x 36 beam that had 3 holes at each end, a 4 hole pattern in the middle, 2 cope outs on the bottom flange of the beam, a very simple beam. My goal was to purchase equipment that would process this piece, and my search kept coming back to the PythonX because it could do so many different operations, all on one machine.”

First, Bourne assessed the reality of the business with the goal of increasing productivity. Since, Universal Steel Inc. had an antiquated punch line; many operations for both structural and miscellaneous were still completed manually. The fitter would have to do all the miters and copes manually and then burning it and then grinding it, a lot more labor was involved. Now with the PythonX, it takes care of all of the miters and cuts of a stair stringer and they use the machine to mark the tread locations, which was a big advantage.

For stair stringers, Universal Steel had to square cut the channel or tube. From a structural standpoint, Bray explains, “The capabilities of the PythonX are well documented by Burlington Automation. All I needed for the PythonX was it to do what you said it would do and it has done exactly that, so exciting!” Another reality that Bourne had to consider was the space restriction. They are land locked on all sides by other properties, so the new equipment had to fit in the existing space as there was no room for expansion. Bourne explains, “One of the things that was important to us was to maximize our fabrication space, so the PythonX being a small package was very valuable to us.”

Bourne also took a look at the business as a whole. What makes Universal Steel unique is that they are a structural and miscellaneous steel supplier. They can provide customers with the structural part of the project, as well as the stairs, handrails, canopies and all the other miscellaneous that goes along with the buildings. When they are chosen for a project, they are expected to deliver on time and they expect all the steel components to be done in house.

The new equipment must allow them to have complete control of their production and continue to do everything in house. Bourne also needed to be innovative by streamlining operations and creating better products. The immediate result of purchasing the PythonX was the increase in throughput in the shop. They no longer have the bottle neck that the previous equipment created. They are able to process pieces through much quicker because less manual labor is involved. Universal Steel has realized an increase in throughput of at least 40%.

The PythonX was the right equipment choice for Universal Steel Inc. as it improved processes, productivity, capacity and innovated the bottom line. As Bourne explains “I went and looked at other machines but the PythonX was the only machine that was going to make us better at what we already do. It brought us into the modern world. My family is convinced now. They look at the great cuts it makes and know it is saving us time and money every day.” 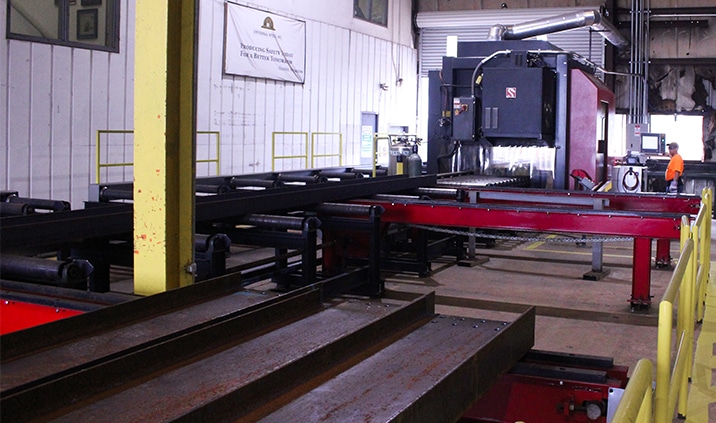