In 2005, Hurricane Katrina hit New Orleans and Southern Services & Equipment was decimated, losing $1 million in uninsured equipment and property damage. The Nunez family took the insurance money from their personal home and began to rebuild their shop while living in trailers. They were awarded dozens of contracts to help rebuild New Orleans and continually reinvested profits back into the business by purchasing state-of-the-art equipment. They decided to purchase a PythonX and took their ‘Mom & Pop Shop’ to the next level.

Southern Services & Equipment, Inc. began as a small fabrication shop started by Marc and Cheryl Nunez in 1996. The business grew as they began to do federal contracting with the U. S. Army Corp of Engineers. In 2005, Hurricane Katrina hit New Orleans and SSE was decimated, losing $1 million in uninsured equipment and property damage. The Nunez family took the insurance money from their personal home and rebuilt their
shop first, while living and running the business out of trailers on their property. The U.S. Army Corp of Engineers recognized SSE’s outstanding business reputation before Hurricane Katrina and as a result awarded them dozens of contracts during the rebuilding process. SSE also hired many local people who had lost their jobs due to the devastating effects of the hurricane.

During the reconstruction process after Hurricane Katrina, SSE continually reinvested
profits back into the business by improving the business infrastructure and purchasing state of-the-art machinery and equipment. Marc and Cheryl Nunez eventually transferred the management over to their daughter, Mindy Nunez Airhart, and her husband, Justin Airhart. Justin excelled at management and operations, while Mindy focused on administration and business development. By 2012, the majority of
the funds that had been set aside for rebuilding the New Orleans flood control system had been dispersed. Once the flood protection system project was complete, Mindy and Justin realized there was a construction boom in the public and private sectors. Over the next few years, the business shifted from a federal contractor to a subcontractor of large general contractors on commercial projects. Mindy used her connections in the construction industry to court a new type of customer: commercial general contractors.

In 2015, SSE started the process to become an AISC Certified Fabricator. They were awarded larger and more complex projects based on this certification, so SSE made another large investment by adding the PythonX® Structural Fabrication System. As Chief Operations Officer Justin Airhart explained, “We decided it was the perfect time to bring our ‘Mom & Pop Shop’ to the next level with the PythonX technology. It’s fast, accurate and produces AISC compliant bolt holes. Plus, with the backing of Lincoln
Electric, it just made sense to purchase the PythonX.”

Before the PythonX, SSE had no automation at all, no beam or drill line.
They were drilling holes for small structural projects with mag drills or
were laying everything out by hand. Justin explained that after the PythonX
was installed, “We went from no structural work to everything coming
out of the PythonX. We were able to process 50 to 60 tons a week within 3
months of purchasing the machine. The ability to pump out more tonnage
happened immediately.” For the first 6 months, SSE ran the PythonX 16
hours a day, 6 days a week.

The PythonX has put SSE is a different league. SSE can now offer the market a more reliable and quality driven result compared to what is currently available in the region, a higher quality product that cannot be matched by fabricators with older equipment. They also instituted an erection division at the same time as the PythonX purchase. As Mindy Airhart explained, “We were very much a ‘Mom & Pop Shop’, and now because of the PythonX, we are competing with some very established structural steel fabricators. Before the PythonX, we manufactured hand rails, guard rails and platforms; now we are fabricating structural steel and erecting it in the field.” The PythonX helps eliminates shop errors so buildings can be constructed faster.

When SSE decided to purchase a PythonX, they were experiencing massive
growth, which fuels costs, so financing was challenging. “Burlington
Automation helped us get financing by referring us to ENGS. Within 90
days of starting discussions with Burlington Automation about purchasing
a PythonX, we had a machine on our shop floor,” Justin said.

One of the reasons SSE purchased a PythonX is because it is compact. Their
shop floor is narrow; the dimensions are 45’ x 300’. They do not have space
for multiple machines like their competitors. They chose the PythonX
because it took a small portion of the floor space, only 5’ x 40’ with some
of the system placed outside the building. “The PythonX allows us to have
one machine that does all the operations and it only takes a small amount
of floor space and that is extremely beneficial. We have added capabilities
without losing any of our floor space.” Justin said.

Another reason was they chose the PythonX is because of the simplicity of
operation. When SSE decided to implement a 2nd shift, they hired the son
of an employee who had never worked or been in a fab shop before and
had no experience operating automated equipment. He was trained and
able to operate the machine independently and efficiently in 3 weeks.

“The training and installation process was one of the smoothest that we
have ever experienced for any equipment we have purchased,” Justin
said. The Burlington Automation team worked with SSE on the layout
of the machine and where they needed to put the electrical access. The
installation crew came to the shop in Louisiana and the machine was operational in 4 days. The training crew came in the following week and since then, they have
not needed to see another PythonX employee for service or maintenance since. As Justin explains, “We have not had a need for a service call since
the machine was installed. We contact the Support team if we have issues but we have not needed anyone to come on site. All issues have been resolved over the phone.”

For a growing company that aspires to be a comprehensive steel manufacturer, PythonX
proved to be the right choice for SSE. “We came across the PythonX and decided to take
a chance. Before we installed the PythonX, revenues were around $3M per year. Revenues increased to $6M the year after, and last year were $11M.” Accordingly, SSE was named to Inc. Magazine’s list of the 5000 fastest owing companies in the United States, for the second year in a row. Justin says, “The PythonX was unquestionably one of the main reasons for our growth and success. We would buy it again in aheartbeat.” 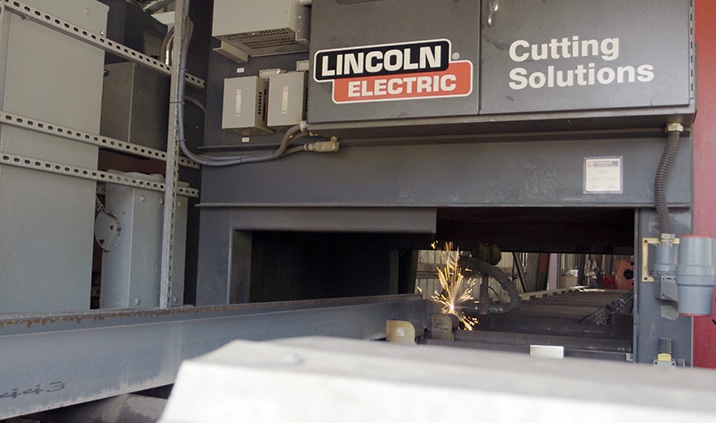