Stehl Corporation – On the Fast Track for Growth

Streamlining the company’s move into structural fabrication has led Phoenix-based Stehl Corporation to the next step in founder and president Paul Stehl’s long-range plan for the company. Adding the PythonX fabrication system has resulted in a 60% increase in growth for 2017, mostly due to increased structural work.

When Phoenix-based Stehl Corporation began expanding its presence in the structural steel fabrication market a few years back, it was simply the next step in founder and president Paul Stehl’s long-range plan for the company.

But, adding a PythonX® fabrication system from Lincoln Electric® in 2016 put the company’s structural fabrication division on a faster track for growth. As a result, Stehl Corp. expects its 2017 volume to top $16 million, up more than 40 percent from 2016, largely due to the increased structural work.

“When I started the company in 1999, we were more of a miscellaneous and architectural metals company, only occasionally doing small, light structural projects,” Stehl said. “The PythonX gave us the ability to take on larger projects. Now, the balance is actually tilted the other way—we’re doing more structural work than miscellaneous.”

A Pattern of Growth

Stehl’s vision for developing a comprehensive steel manufacturing company stems from the decade he spent working in the industry before launching Stehl Corp. “I’m a welder by trade,” he said, “but I started in the shop sweeping floors, grinding welds, and working in the paint booth.”

Over time Stehl learned fabrication and welder skills. He worked his way up to shop foreman and production manager positions, ultimately becoming general manager. After honing both his iron working and business management skills, he left to start Stehl Corp. To Stehl’s credit, the company has grown steadily. Less than a year after launching it, Stehl bought out his investment partner and became the sole owner. In 2003, sales topped $1 million for the first time and Stehl Corp. relocated to a larger facility to accommodate upcoming projects. With continued high aspirations, the company again moved to larger facilities. It soon became a regional leader in the production and installation of spiral staircases, and formed its Piazza Door division, which continues to thrive. In 2009, Stehl Corp. acquired property adjacent to its existing facility, and plans for the launch of the structural division began to fall into place.

“With the adjoining property, we knew we had a little bit of room, and we knew the type of work we were heading toward—and getting bogged down with,” Stehl said. “We wanted to automate to speed up the process and increase our volume. So, we did our due diligence and searched around the market for some time.”

That in-depth investigation turned out to be a two-year process, including “lots and lots of online research,” Stehl said, as well as talking with and visiting others who were using the PythonX and competing systems. In the end, the advice Stehl received from others in the industry played a primary role in his selection process.

Although excellent long-term performance was a major criterion, the speed of installation and return to production were also key factors. “From all accounts, the PythonX offered the quickest turnaround,” Stehl said. “Today, the PythonX is a comprehensive part of our structural steel manufacturing. It processes all of our beams, columns, and structural shapes.”

Specifically, Stehl Corp. uses the PythonX to cut all the holes for typical structural connections, including cast-in-place beam connections, and to prepare beams for full-penetration welds. “It pretty much does everything but weld the plate to the structural member,” Stehl said.

In bringing the PythonX on board, Stehl Corp. was adding to its capabilities rather than replacing another beam line. Even so, any change in process presents a challenge. And, of course, even the best piece of equipment requires an operator.

“The PythonX is very user-friendly,” Stehl said. “But, it’s a complex piece of equipment and still has a learning curve.”

The company initially selected three of its current employees to be trained to operate the PythonX.

“The intent was to have one full-time operator on the day shift and one full-time operator on the night shift, with a third as a backup to fill in as needed,” Stehl said. “Two of the guys were fabricators—welders, you know, the type of people who would have a good inclination toward running it—and the third was my daytime painter. And at this point, the painter is probably the most efficient at running it.” But finding the right personnel wasn’t the only hurdle.

“One of the strange adjustments we initially faced was not being able to keep the PythonX busy, because it was so efficient,” Stehl said. “When you’re used to pushing a certain amount of steel through a shop on a daily basis, and you introduce a piece of equipment like this—one that can do in four minutes what it takes a person four hours to do—all of a sudden, it processes your whole day’s worth of steel all before it’s time for lunch!”

Stehl Corp.’s PythonX is outfitted with both infeed and outfeed cross-transfers, as well as an infeed conveyor, for maximum productivity. But beyond productivity, the system also offers capabilities the company previously did not have.

“We’ve used it to cut out silhouettes and things like that on structural members, which we previously would have had to send out,” Stehl said.

“For example, right now we’re looking at cutting a company’s logo into an exposed 12-inch channel for a customer. So, there’s more than just the straightforward cut-and-cope beam applications.”

For a growing company that aspires to being a comprehensive steel manufacturer, the PythonX is proving to be the answer to numerous challenges, not the least of which is embedded expertise. “The PythonX has made us more competitive,” Stehl said. “We are able to take on larger projects with a decreased margin of error. And because errors are costly, that has also increased our margins on structural projects.”

Accuracy, productivity, and simplicity—who could ask for anything more? 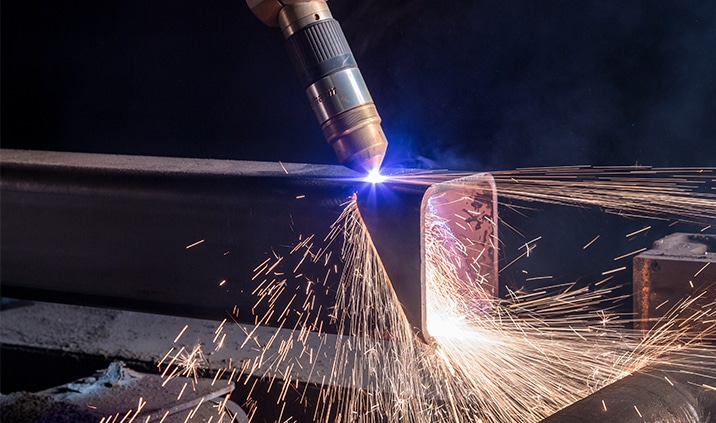