Read More
LMC had a long term vision of becoming a global supplier of structural steel. Automation was one way of achieving this goal, so they decided to purchase the PythonX. They gained more business because the PythonX completely changed the process in the shop. Productivity was significantly increased and they became extremely competitive in the marketplace.

After 17 years of travelling along the east coast and Alaska to work as a welder, Larry Mehlenbacher decided it was time to settle down. So, in 1982, he started LMC Industrial Contractors in Avon, NY. For the longest time, LMC was a mechanical contractor but Larry had vision for what he wanted his business to become.

The long term vision was to become a global supplier of structural steel as well as a global supplier to the natural gas industry explains Jeff Holley, VP of Operations for LMC. In order to achieve this, a bold move was made in 2005 to purchase the former Foster Wheeler Energy Corporation facility in Dansville, NY. It was 89 acres and 500,000 sq. ft. of manufacturing space. The facility was close to four major interstates and rail access. Now LMC was closer to the growth they wanted to achieve.

The next step for growth was automation, so the search for an automated beam line began. However, LMC decided to hold off because they made other investments in the company and Larry had made a promise to all the employees that no one would lose their job with the purchase of the automated beam line. Ultimately, the decision was made to linpurchase the PythonX® in late 2015. Waiting to purchase actually worked out in LMC’s favor because the PythonX now offered underside cutting capabilities which at the time was a new feature added to the host of PythonX existing capabilities.

Alan Youngleisch, QA/AC Manager explains that the PythonX gave them the opportunity to pick up more business by changing the process in the shop.

“What it has done is taken us from antiquated ways of using a saw, laying out with a tape measure, punching a hole location, grinding elongated holes, using magnetic drills to drill, using torches to cut copes and things from everything like angles to flat stock to channel and any structural pieces we put through”.

LMC knew they made the right decision when they processed one of the first large jobs through the PythonX. They had to cut 40 beams to 29 ft. with quite a few holes and copes. Before the PythonX, it would have taken 2 employees about a week, approximately 80 hours. With the PythonX, the entire job was completed in only 4 hours and 29 minutes.

“We realized we made the right decision. It has helped us to continue to grow with processing work on the PythonX and it also gives us opportunities to build and weld different components for these customers. It has been a beneficial purchase.” said Youngleisch.

Most importantly, PythonX enabled Larry to fulfill his promise to his employees because of all of the extra work that was picked up because of their increased productivity due to the PythonX.

The installation and training for the PythonX went extremely smooth. The Burlington Automation team provided all the support needed. The PythonX was installed in 1 week, 5 days of training and then they were up and running. The Operators were trained and learned quickly how to operate the PythonX and within less than a month, they were at 95% efficiency with the system. “We had very few issues, if any”, said Youngleisch. “Any issues experienced were due to the engineering software not the PythonX and fixed once the settings were corrected. We were extremely satisfied with the support received from Burlington Automation.”

“We are excited about the new opportunities the PythonX will bring us” said Holley. The purchase of the PythonX enables them to pick up additional work that they were unable to do before its purchase. After installing the PythonX, LMC received their Bridge Certification through AISC. The Governor of New York state released $55m in bridge repairs. LMC was now able to bid on these projects because of the PythonX. LMC is also using the PythonX to offer the processing capabilities beyond those of most Service Centers for other steel fabrication companies.

Those fabrication companies are doing their own drawings and engineering work and sending the files to LMC to upload to the PythonX to process the steel. They are then delivering their steel here to LMC, who are then processing it and then are delivering the finished product back to the customer. Servicing other structural steel fabricators gave them an opportunity to process 300 tons of steel through the PythonX which resulted in significant growth.

“It has absolutely changed our business and given us capabilities we didn’t have before“, said Holley.

PythonX has significantly increased productivity that has enabled LMC to become a full service contractor that can handle a project from start to finish. “It has allowed us to become extremely competitive with a complete turnkey package. Most companies we compete against buy their structural steel from somewhere else and experience problems like the pieces not fitting together or a misunderstanding of a drawing. But with a PythonX, we are able to handle all parts of the project from start to finish and eliminate all problems that may be encountered on the job site” said Holley.

LMC Industrial Contractors, Inc. was founded on the simple principle of, “Give the customer what they ask for, do a good job, and when you’re done, give them a little extra so they want you back!” PythonX enables LMC to give their customer a little more so they come back.

“When we are asked to supply something on a project, we make sure we go the extra mile. With a PythonX, we are able to put piece marks on all the structures and we use 3D modelling to assist our erectors. And all this starts with having a PythonX. If we didn’t have the PythonX, we wouldn’t be doing drawings in 3D, we would be doing it the old way. It has changed the outlook from our customers because they see that we are doing something that no one else is doing.”

PythonX quickly paid for itself because of the increase in work and attrition.

According to Holley, significant labor savings has been achieved with the PythonX, “We are saving about $500,000 a year in labor costs. We have had zero rework from the fab work that we’ve done. We can put 10x more volume through our shop than before. We have increased our capacity 10 fold since purchasing the PythonX“.

The quick ROI had enabled LMC to reinvest in the remodeling and enhancing the facility in a relatively short time period. 2017 has been the busiest year in the history of LMC as revenue has doubled compared to the previous record year!

“That’s why we’re thinking about getting a second PythonX,” he said.

“With the many jobs we have going through here, as long as the economy holds up, it would be nice to have. We’ve got the layout for it, and we’ve poured the concrete. So, if our owner says go for it, we’re writing the check.” 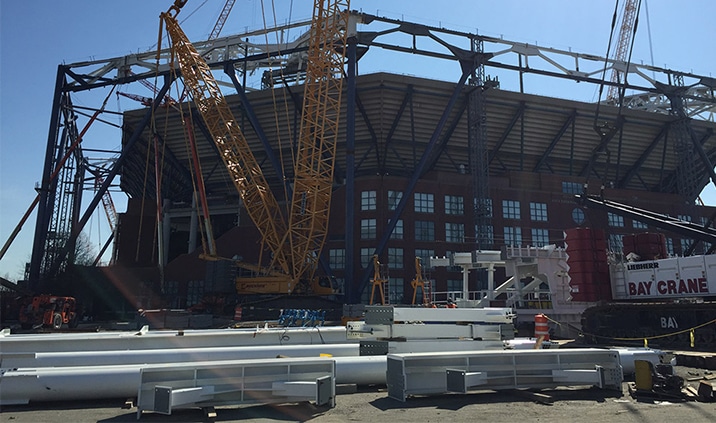