When Bob Reiman signed on as Anderson Steel’s vice president of operations back in November 2015, the Great Falls, Montana-based steel fabricator wanted to grow its business. Reiman had a specific plan in mind to make that happen for the third-generation, family-owned company In his previous position, Reiman had visited numerous fab shops in Canada and the United States where he saw Lincoln Electric’s® PythonX® in action.

“I told the owners, ‘There’s a technology out there that you’ve got to look into. It’s going to turn our automation around,’” Reiman said. “And so, we did.”

The PythonX structural steel fabrication system uses a robotically controlled plasma torch to cut holes, copes, weld prep on flanges – all the processes that in the past required drawing interpretation, layouts, and cutting by hand with torches. The system also cuts beams to the proper length.

PythonX replaces the traditional stand-alone beam line, drill line, coping machine, and in many cases, saws. It also offers dramatic productivity improvements by eliminating the handling typically required between each of those operations. Producing an infill beam today in the Anderson Steel shop previously would have taken up to two hours. Now, it takes 4 to 10 minutes depending on its complexity.

“We went from 12 beams a day to 100,” said Reiman. “The seven-axis robot does everything in one shot and just pushes it out.”

Reiman’s enthusiasm about purchasing a PythonX system had to be balanced with the real-world economics – it meant a significant investment, and Anderson’s 2002-vintage beam line that it would replace had not yet fully depreciated. Although asset depreciation is a great way to periodically finance equipment upgrades, technological advances sometimes outpace the depreciation schedule.

At those times, taking a leap of faith can result in significant rewards, and the possibilities the PythonX would open up for Anderson Steel made the investment worthwhile. Since installing the system in 2016, Anderson has seen its consumables use drop 30%.

“We bought a big bulk oxygen tank at the same time, partly because we also purchased another plasma table,” Reiman said. “We’re using a lot less gas compared to what we were using.” And although replacing wear parts on the plasma system can be higher initially, the company is still seeing a 42% net savings. In addition, acquiring the PythonX allowed the company to take on larger and more complex projects and reduce the need for rework. “We were doing just 50- to 100-ton jobs, and now we’re doing 1500-ton projects without any issues in the shop,” Reiman said.

“We get it in, and we get it out. Customers are happy. And there’s a big difference in the error that we had when a human was doing it as opposed to the computer. Now when we ship materials to the jobsite, we hardly ever get any back charges because the thing just fits together like a puzzle.”

Another tangible benefit has been the increased rate of throughput. “We’ve been able to pass along to our customers the savings of reduced time in the shop,” Reiman said, “so we’re getting more jobs because we’ve been able to reduce our operating costs.” He adds that customers now expect faster turnaround: “The GCs that we have today, they want it now. And with this technology, we can give it to them now, and that’s a nice thing.”

How the Transition Played Out

The installation of Anderson Steel’s PythonX actually went smoother than anyone expected. “I bought a couple of extra saws that we put in a different area so we could keep fabricating in the event that the installation was going to disrupt our production,” Reiman said, “It really didn’t.” The installation team had provided Anderson Steel with a list of all the tools that would be needed for the installation, so everything was ready upon their arrival. This kept the process moving.

“They came in, they did their job, they got it running, they did the training, and we were up and running in no time,” Reiman said. All told, the time to complete the installation and for the operator to feel comfortable with the new system was minimal. “At first, he was doing 40 beams a day, which still is more than 12,” Reiman said. “But now he’s up over 100, with no issues at all.”

With the introduction of any automation, people’s responsibilities are bound to change, and this important equipment upgrade was no exception. “Before, I had one guy running the beam line, because everything was in a line. That person just moved over to run the PythonX,” Reiman said.

“He was a little nervous at first. He was worried about his computer skills. But, he picked it right up. It was not a big deal at all to him. Now he’s training people, too, so it’s going well.”

The company also has hired more than a dozen people to handle the increased workload generated by adding the PythonX to the company’s operations. “We have large fabricators calling us now to use our PythonX for their infill beams,” Reiman said. Because the PythonX works directly from standard steel detailing software, any machine can do the work. “That’s one nice thing about the PythonX. Once you have your program, you can share it with anyone.”

Reiman said he’s now able to run four or five jobs through the shop at a time, unlike its previous one-job-at-a-time operation. At the same time, customer complaints have virtually disappeared. “That’s why we’re thinking about getting a second PythonX,” he said. “With the many jobs we have going through here, as long as the economy holds up, it would be nice to have. We’ve got the layout for it, and we’ve poured the concrete. So, if our owner says go for it, we’re writing the check.” 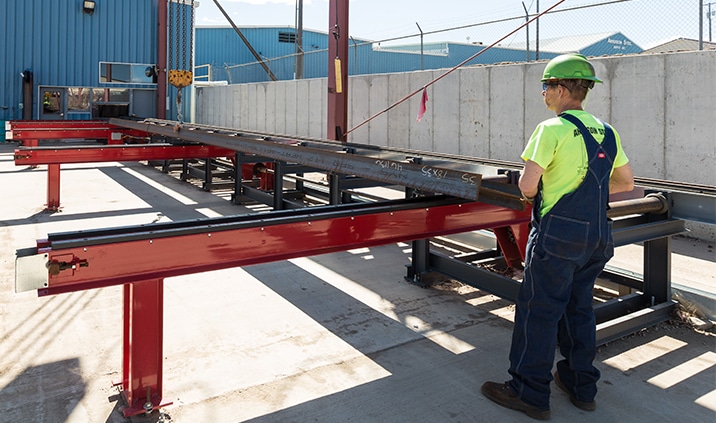